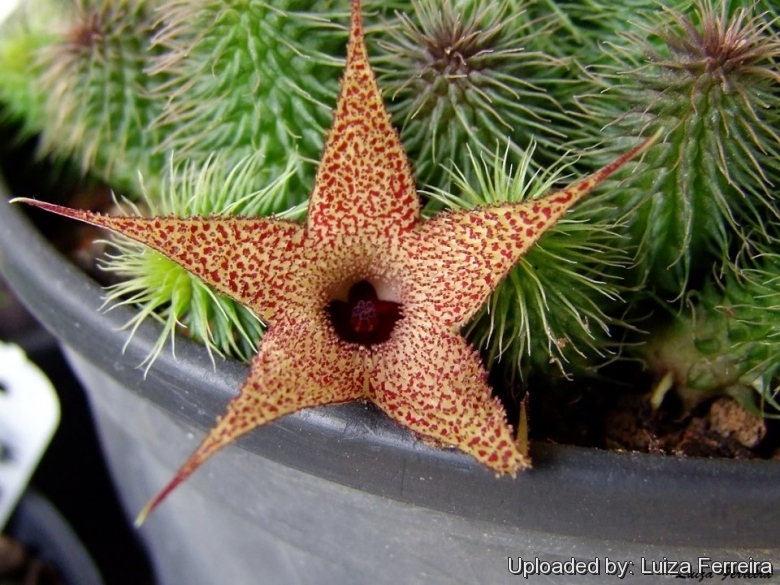 Origin and Habitat: Republic of South Africa, Cape Province (Western Cape, Eastern Cape). This distribution is centred approximately on Ladismith, with the easternmost substantial populations found south of Oudtshoorn (the isolated record of this taxon from near Steytlerville cited by Leach (1968 is atypical and should not be over-emphasised).
Habitat: The plants grow up mostly among stones under small xerophytic shrubs (such as Pteronia sp., Relhania sp. and members of the Mesembryanthemaceae) on flat areas and around the foots of hills.

Description: Huernia pillansii is one of the most distinct species of this genus, no other having similar bristle-covered stems, which resemble those of a Hoodia in miniature. Several forms of this species exist and may just be considered as forms as none are distinct enough to justify naming them. Justly popular for its stems and showy star-like blooms. The flowers are somewhat like those of Huernia hystrix.
Habit: It is a densely tufted carpeter plant.
Stems: Soft 2-5 rarely to 18 cm, long, 12–20 mm in diameter, erect or ascending, subglobose when young, becoming narrowly ovate or cylindric.
Tubercles: Small, crowded, conical recurved bristle-pointed tubercles 2-4(-8) mm long, in 9-16 (rarely to 24) vertical or spiral series, glabrous, green, or dull purplish where exposed to the sun.
Leaves: Rudimental 2-8 mm long, as soft bristles more or less divaricate. usually marcescent.
Flowers: 1–3 together near the base of the young stems, successively developed 1-5 cm in diameter with a cup-like tube mostly facing upwards.
Pedicels: 3-4(-8) mm long, glabrous.
Sepals:(4-)6-8(-12) mm long, 1,5-2 mm broad, ovate-anceolate at the base, attenuate into filiform recurving tips, glabrous.
Corolla: 2,5-5 cm diameter, outside yellow or reddish brown, inside cream-coloured or yellowish, stippled with irregular blotches of red or maroon.
Tube: Cylindrical, campanulate, (at times cup-shaped) with labyrinth-like reddish dots, 5 - 9 mm long and as much in diameter outside.
Lobes: Triangular, abruptly and horizontally spreading from the tube or revolute, 10-12(-22) mm long, 6-7(-10) mm broad at the base, whence they gradually taper to a fine acuminate point, glabrous outside. Inner surface and margins densely papillose covered on the lobes and in the throat of the tube with small fleshy terete obtuse erect processes 0,5-1 mm long, smooth in the lower part of the tube, pale yellow, becoming pinkish-cream in the tube, covered with small crimson spots and the tips of the processes also crimson.
Outer corona: 5-lobed, black or purple-black; lobes about 1,5-2,5 mm long and broad, subquadrate or oblong, very shortly and obtusely bifid to acutely bifid to the middle, when the whole appears to consist of 5 pairs of small deltoid teeth.
Inner corona-lobes: About 2-2,5 mm long, tapering from a swollen base to a knob-like tip. trapezifom, connivent-erect, with very slightly spreading tips, dorsally flattened, linear, slightly humped at the base, acutely verrucose, at the obtuse slightly thickened apex, dark purple-brown.
Staminal column: About 3 mm long yellowish to greenish germination mouth region darker.
Blooming season: It flowers freely in late summer and early autumn.
Fruit: Paired follicles.
Seeds: Numerous, strongly compressed, with a coma (a prominent basal tuft of silky hairs). 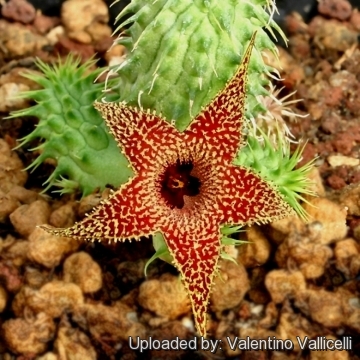 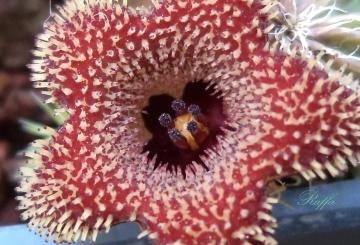 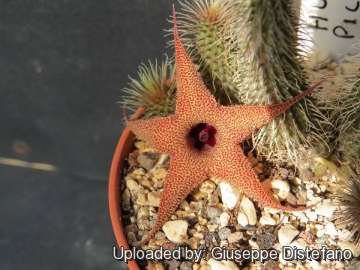 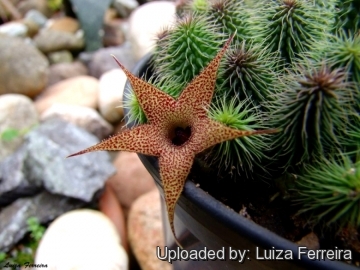 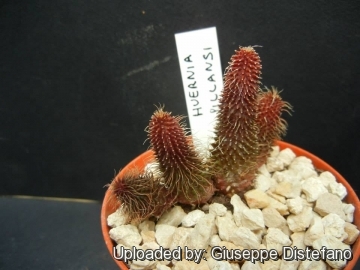 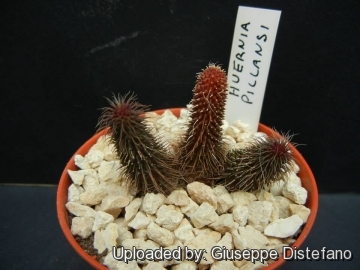 Huernia pillansii Photo by: Giuseppe Distefano
Send a photo of this plant.

Cultivation and Propagation: Huernia pillansii isn't difficult to grow and flower.
Spring: When winter ends and they begin to grow again, they will require much water and soaking the pots will no longer put the plants at risk for rot. In the spring they will grow well in partial shade and leaving them out in the rain may provide them with the water they need.
Summer: In the summer months they will tolerate heavy rain, but will be just as happy if the season is dry. It's best to sort out the stems while the plants are resting in the summer before they begin their autumnal growth cycle. They will tolerate very hot weather outdoors as long as they are kept in filtered light and this will encourage them to flower in the Autumn. They also enjoy some fertiliser. Moving the plants as they are developing buds may cause them to spontaneously abort the flowers all together.
Autumn: In the fall keep them outdoors until the night time temperatures drop below the 5°C.
Winter: Winter care presents no problems at 5°-10° C with plenty of light. As soon as they are flowered be sure to take extra precautions to keep them dry, because damp cool conditions when the plants are resting is an invitation to fungal infections, but - according to temperatures –some occasional lit watering may be useful.
Potting medium: Since roots are quite shallow, use a cactus mix or add extra perlite or pumice to regular soil potting soil. A gritty, very free-draining compost is suitable, and clay pots help the plants to dry out between watering. Re-pot every 2 years.
Pest and diseases: Huernias are generally fairly easy to grow, especially if kept pest-free. They are very susceptible to stem and root mealy bugs, and damage from these may well initiate fungal attack. Any time when there is a dead or dying stem in the pot it is important to remove it immediately and completely before other healthy stems can become ill too, isolate the healthy parts, dry them off, and re-root them in new compost.
Propagation: Easiest with stem cuttings. Allow cuttings to dry a day before planting. Stems must be laid (Not buried) on gritty compost and will then root from the underside of the stems. It can also be increased from seeds sowing in spring in moist, sandy peat moss. Barely cover seeds. Seeds germinate quickly.
In any season it's best to lay the stems out for several days before replanting them and then pot them only in dry soil and withhold any water until they begin to shrivel or start growing again.