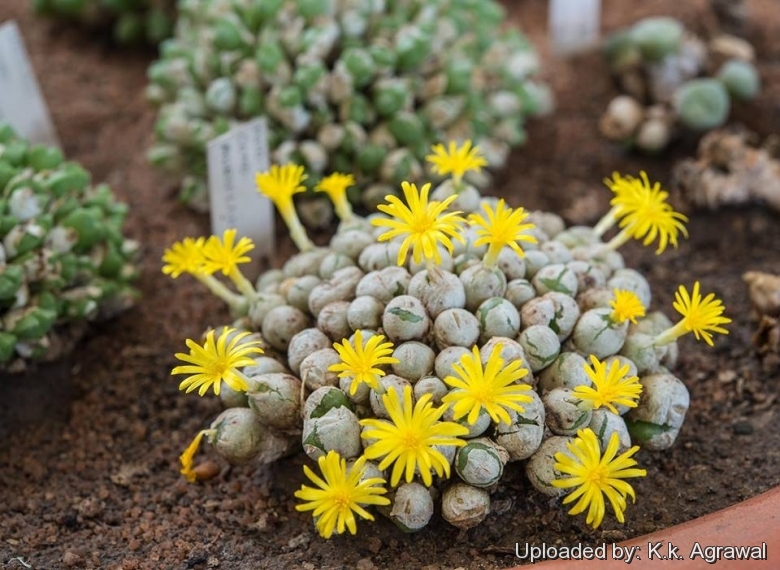 Origin and Habitat: Conophytum auriflorum has a resticted range around Komaggas in western Namaqualand, Northern Cape, South Africa (Extent of occurrence 100 km²)
Type locality: Near Steinkopf.
Altitude range: 690 - 1000 metres above sea level.
Habitat and Ecology: It is a specialist species that grows in Succulent Karoo on quartzite slopes or sandy soil, often in crevices or on rocky outcrops, it is not threatened.

Description: Conophytum auriflorum Tischer (ssp. auriflorum) is small densely branched perennial-succulent that forms low clumps or mats. The fused leaf pairs are cone-shaped, dark green with reddish on sides. While the small bright yellow autumn flowers are already fully developed here, the new leaves are lurking inside the papery husks of their predecessors from last season. They still display the withered rest season look of the dry summer. The young leaves will swell out fully from inside them as the winter rain allows. Conophytum auriflorum was named for the gold of its petals. Like Conophytum minusculum, which this species much resembles, it is a true winter-grower. Two subspecies are distinguished the nominate and ssp. turbiniforme.
Bodies (paired leaves): Barrel-shaped to long cylindrical or inversely conical with translucent fissure surrounded by a dark green band, apex convex, to 10-15 mm long, 4-6(-9) mm wide, 3-5 mm thick. Epidermis rich green to reddish-green or brownish, glabrous, shining, unspotted or sparsely dotted, or or with a few wide translucent streaks but never regularly striate marked with white raphides. A brown-bodied form found near the Messelpad is peculiarly small and remains slow and stunted in cultivation.
Flowers: Yellow, diurnal and scentless Petals short, ± broad
Fruits: 4-locular
Chromosome number: 2n= 36

Subspecies, varieties, forms and cultivars of plants belonging to the Conophytum auriflorum group 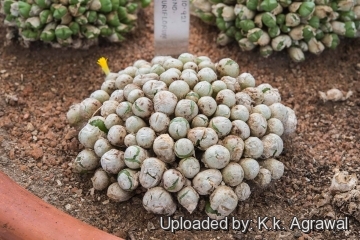 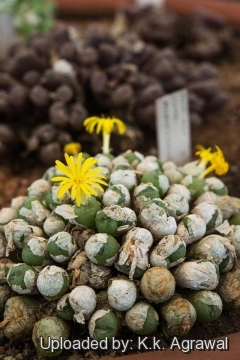 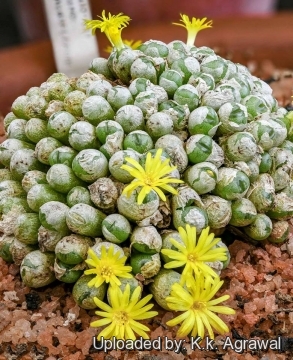 Conophytum auriflorum Photo by: K.k. Agrawal
Send a photo of this plant.

Cultivation and Propagation: Conophytum auriflorum and its varieties are among the most popular of this genus but relatively difficult to grow. These plants grow on winter rain and head for summer dormancy. The growing season in northern hemisphere is from September to March. During this period they can be lightly watered about once a week or (better) misted every day and will become plump. In Africa, the mist from morning fog provides moisture. Otherwise their epidermis breaks (resulting in unsightly scars). Water minimally in summer, (only occasional misting). Start watering again in autum after the previous year's leaves have dried up. Require good drainage. They enjoy full sun or half-shade and in summer they need to be kept in a cool area. Hardy to -2°C. Ensure a very good ventilation. Avoid to repot frequently. They may stay in the same pot for many years. Plants grown in larger containers have frequently relatively poor flowers. They might improve when the plants are given their own, small individual pots.
Propagation: They can be reproduced both by cuttings and seeds. Seed must be sown in the spring or summer. The seedlings should not be disturbed until they are well rooted, after the first or second year they should be big enough to separate and be planted into their own pots. Take the cutting from a grown-up mother plant. Each cutting must contain one or more heads along with a fraction of root.