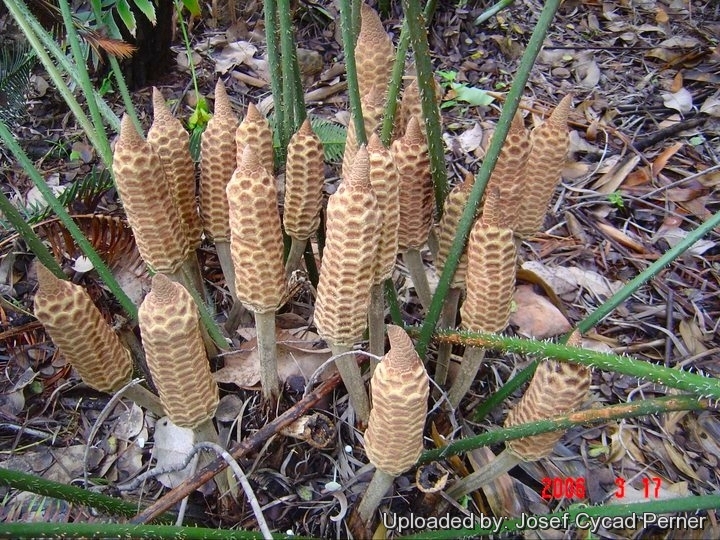 Zamia variegata Photo by: Josef Cycad Perner
Female cones in Joe's Cycad Gardens. This species usually produces few seed cones, but at a time up to 20 or more.

Origin and Habitat: The main distribution area for Zamia variegata is in Guatemala, where it is found in the catchment of the Rio Motagua. Plants are also found in Chiapas state (Lacandona area) of Mexico and in the coastal, wetter areas of southern Belize and Honduras (mainland). The species is locally common with several thousand individuals.
Habitat and Ecology: This species occurs in hot and humid lowland forest of the coastal range to higher elevation pine-oak forest. Zamia decumbens has been observed growing together with Zamia variegata at one location in southern toledo district in Belize, with no evidence of hybridization. These two species are unlikely to overlap much geographically, as most observed populations of Z. decumbens occur above 300 m, which is the maximum of the altitudinal range of Z. variegata in belize. However Z. variegata can be found up to 500 meters elevation in pine-oak forest in southern Mexico (Chiapas). Z. variegata is the larval foodplant for the butterfly Eumaeus toxea. This species is threatened by habitat loss.

Description: Zamia variegata Warsz., often listed as Zamia picta Dyer. is the only variegated species of cycad in the world. It was described by a Polish botanist in 1845. It is very similar to Zamia prasina but with conspicuously spotted leaves (resembling a virus infection). This species is often described as “small” in size, but it can have fronds more than 3 meters long. Though there are a number of related cycad species, none possess its one unique feature – variegated leaves. Given its fairly broad range it may in fact represent more than one taxon, but that remains to be proven. The amount of variegation seems to differ over the plant's range. Z. variegata is considered by some authors a synonym of Zamia muricata.
Habit: Z. variegata is an evergreen herb with a relatively small underground stem or caudex, at least in young plants, but sometimes up to 2.5 m. tall in very old specimens. The stem is basically round and usually not more than 20 cm across, boasting just a few leaves at any given time. Zamias are dioecious, meaning that there are separate male and female plants, and the female produces seeds while the male produces pollen. The female cones usually are born few in number while male plants can throw many cones all at one time. The latter are thinner and much smaller in size than the female cones.
Leaves (Fronds): Once pinnate. Rachis (midrib) and petiole covered with numerous short, sharp spines. Petiole terete, up to 1/3 of the total frond length, which is typically 1.5 to 2.5 meters long, but may be up to 3 meters in exceptional specimens or in shadier positions. Leaflets 10-12 pairs or more, alternate or subopposite, lanceolate or oblong-lanceolate, sometimes oblong-oblanceolate 15-35 cm long and 4-9 cm wide, stiff, contracted at the base, and glossy green, paler beneath, variegated with small yellow irregular yellow-green lines, spots, and patches (resembling a virus infection). Margins serrated, spinulose-denticulate from the apex sometimes almost or quite to the base. The newly forming frond of Z. variegata is covered in a fine light green and brown pubescence, which is eventually shed from the mature frond. Over a period of 5-8 weeks these gain in size and finally mature and harden off.
Female cones: Usually few, cylindrical, 5-11 cm long, 3-3.5 cm thick, on a peduncle 4-6 cm long.
Male cones: Often numerous all at one time thinner and much smaller in size than the female cones, cylindric, conic-acuminate or obtuse, 3-6 cm. long, 1 cm. thick, on peduncles 4-11 cm long, scales hexagonal, 6 mm wide or less.
Seeds: Ovoid, trigonous-compressed, red. 3 cm long, 2 2 cm thick.
Variegation: While variegation is seen in a variety of cycad species, it is always the result of genetic mutation. How the variegation in this species became genetically stable is a mystery. Most specimens show at least some variegation, however some are nearly pure green – sometimes called the ‘concolor’ variety. Regardless, it appears that the genes regulating this variegation are dominant since hybrids with other Zamia species are said to have variegation as well. 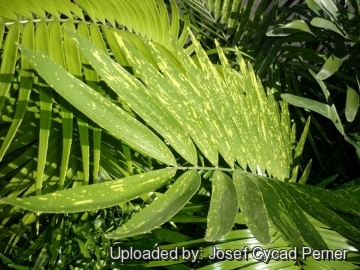 Zamia variegata Photo by: Josef Cycad Perner
Send a photo of this plant.

Cultivation and Propagation: Zamia variegata is a medium-sized cycads with long mature fronds up to 3 meters long that hang in a graceful arc and it is among the more beautiful Zamia. It is easy to grow, but seldom seen in collections. It must have heat, water, humidity, all the time. Even so it worth a place in every cycads collection for its beauty. The main drawback of this plant is its frost intolerance. While it can easily take winter temperatures down to even 5 C on occasion, it will not tolerate freezing temperatures for very long before running into trouble. Therefore it can only be considered for tropical to subtropical gardens, USDA cold hardiness zones 9b or higher. It is also cultivated as an indoor plant in temperate countries.
Growth rate: It is said that well grown plants can reach reproductive size in less than 10 years from seed – fast for a cycad. The speed at which this young fronds expands and matures into a full grown frond is truly remarkable, as in other cycad species.
Exposition: It prefers bright light exposure but no sun on this one as you will only succeed in burning its lovely fronds, best with some protection from afternoon heat but not in constant deep shade. They are adequately yellow blotched in the shade!
Soil: Needs a neutral, well drained yet organically rich compost, but will still thrive in less than ideal conditions. Mulch with organic materials (bark or leaf mould).
Moisture: This is a plant of wet, warm forests that benefits from ample watering.
Fertilization. Because of its growth habit, fertilize only when terminal bud begins to swell, indicating the start of the annual growth cycle.
Maintenance: Minimal; removal of offsets if desired, removal of spent fronds. The young frond is very soft and easily harmed, so it is necessary to protect it from insect and mechanical damage.
Use: Landscape as cultivated perennial in warm areas, it makes a great accent or specimen plant. Several can be planted together for a lush, tropical effect. Plant on three to five-foot-centers to create a mass planting. Use near the patio, in mixed foundation plantings or in perennial beds.
Warning: One must be careful when grooming this plant, as it has many nasty spines on its petiole, that get worse as the plant matures. All parts of the plant are poisonous to animals and humans. Poisonous Parts: Fleshy seeds, and leaves. The starch of the roots is stated to be very toxic. Protect pets and instruct children to never eat or chew any plant material without permission.
Propagation: Seeds. Very easy to start from seed to achieve in cultivation, after fertile seeds are collected, they usually need several months of storage before the inner embryo is ready to germinate. Therefore, it is best to clean the seeds of external fruit and set them aside before attempting to propagate the seeds. Seeds should be sown in shallow container, lightly covered with sand and place in a warm location. They love moisture, so a greenhouse style seed starter is best. No heat needed from below. The growing plants do best in partial shade. The old plants occasionally send up suckers around the base of the trunk. These may be taken off when in a dormant state and rooted, care being taken to remove the leaves to guard against excessive transpiration. The advantage of the "pups" is that you will know its sex, for seedlings you will have to wait several years until the plant flowers to find out.