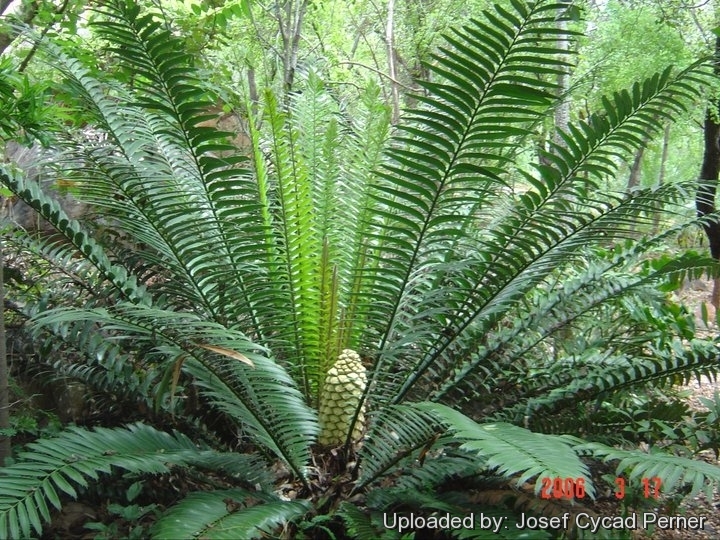 Origin and Habitat: Encephalartos hildebrandtii occurs in the coastal and near-coastal districts of Kenya and Tanzania including Zanzibar island (Tanzania). Reports of cycads from northern Mozambique may also turn out to be E. hildebrandtii. Type from Kenya. It occurs in many locations, and is locally abundant in places. Population size is estimated to be about 20,000 mature individuals. However, subpopulations have been destroyed on Zanzibar and along the coast due to urban and tourism developments and expanding agricultural activities.
Altitude range: This species occurs from sea level up to 600 m. within about 80 km. of the sea, and on river banks at higher altitudes about 1200 m. in Uganda.
Habitat and Ecology: Mainly found in coastal evergreen bushland and dry lowland savannah forest, in red loams and sandy soils among grass and also in the coast belt among bushes on recent coral formation. The Endangered Zanzibar red colobus monkey (Procolobus kirkii) fed rarely but consistently on the leaves of Encephalartos hildebrandtii, but despite toxicity is high across leaves the colobus appear to be one of the few mammal species able to exploit this abundant food source. Habitat destruction as a result of urban expansion, coastal resort development, and agricultural expansion is having a direct impact on the species. Former large subpopulations of the species have been lost as result. This species like all cycads is highly sought after in the horticulture trade. Plants are removed from the wild and sold to hotel developers, etc. nationally.

Description: The Mombasa Cycad (Encephalartos hildebrandtii) is a spectacular, evergreen, arborescent cycad. Its trunk grows to 30 cm in diameter, and it can grow over time to 6 m tall. Each stem is topped with a crown of long, stiff fronds up to 3 metres long, with slightly keeled leaflets having more than 3 teeth on their edges, and a 2-3 spines forming “trident” tips. New leaves emerge a very attractive orange to olive green, hardening off to a glossy dark green.
Stem: Usually well developed, cylindric, casually branched, up to 6 m high, 30 cm in diameter, occasionally short or very short, closely covered with alternating scales and persistent imbricating leaf-bases sparingly clothed with grey cottony tomentum.
Leaves: Linear-oblanceolate, 2-3 m long, 30–65 cm wide above the middle, tapering gradually to the base, dark green. Petiole and rhachis subcylindric, grey-white woolly when young; soon quite glabrous. Rhachis rounded above, not or very shallowly grooved between the leaflets. Pinnules (leaflets) 50–70 pairs, firmly coriaceous, dark glossy green above, obscurely striate with 26–40 parallel nerves below; linear-lanceolate, very slightly falcate, 15–35 cm long, (13–)20-25(-45) mm wide, somewhat unequally attenuated to the narrow base, apex acute, pungent or 2–3 spiny and margin with 1–4 (usually 2–3), diverging teeth on either side, often crowded at the base, the uppermost teeth generally some distance from the tip but not infrequently high up and the tip then 3-spinescent—in young plants casually 4–5-spinescent.
Male cone: Peduncled, sometimes up to 7 in one crown, greenish or dull-red, cylindrical to subconical or fusiform, 20–50 cm long, 5-10 wide. Peduncles 5–25 cm long, 1.5–3 cm. diameter, tomentose, with scattered scale-leaves. Scales spreading, obovate-deltoid, fertile portion 2 cm long, rather longer than broad, apex rhomboid, 16-18 mm across, the lateral angles acute, the upper very obtuse, ridged and faintly faceted, not umbonate.
Female cone: Subsessile, green, at length becoming dull yellow, subcylindric, up to 28–60 cm long, 15–25 cm wide; apex of scales wide-rhomboid, 3.5–5 cm across, 2.0–3.5 cm deep, lateral angles explanate, upper and lower very obtuse, umbonate near the lower angle.
Seeds: Ellipsoid or ovoid, faintly angled, 28 mm long; outer coat vermilion.
Taxonomic notes: The taxonomy of E. hildebrandtii originally brought together a number of scattered populations of somewhat questionable relationship. Plants from the eastern Democratic Republic of the Congo and Uganda are now treated as two separate species: Encephalartos ituriensis and Encephalartos whitelockii. The distinction between Melville's two varieties of E. hildebrandtii, var. hildebrandtii and var. dentatus, was based solely on cone characteristics. There is general agreement that the differences are minor and hence the two varieties are no longer recognized. 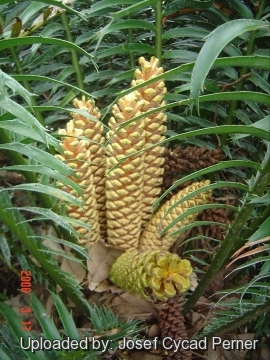 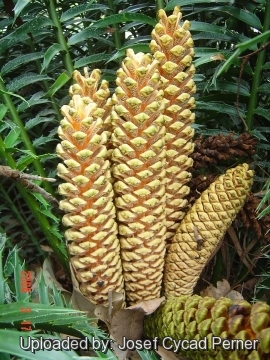 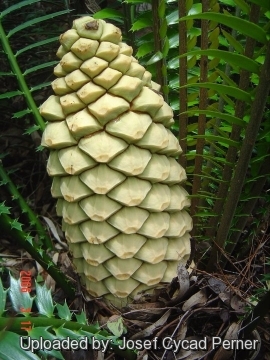 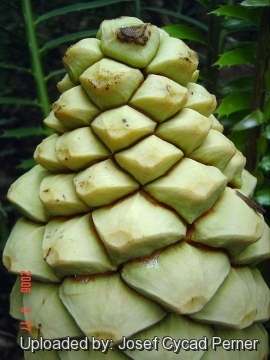 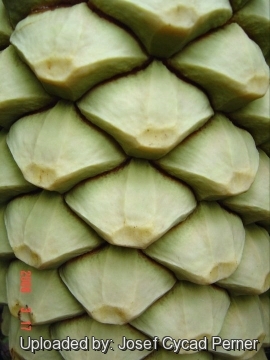 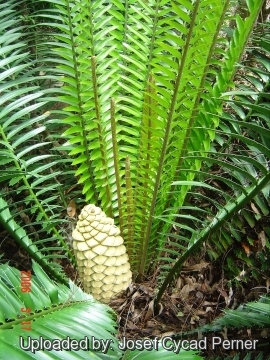 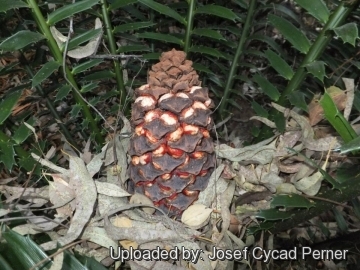 Cultivation and Propagation: As a garden subject, Encephalartos hildebrandtii is one of the most spectacular of all cycad species. The seedlings grow rapidly, developing into an attractive garden plant with 1 m long leaves in four to five years. This is one of the fastest growing cycads and responds well to cultivation provided it has a well-drained soil, frost-free conditions and regular watering during the dry months. It is an adaptable plant well suited to subtropical climates. It can be grown in full sun without its leaves burning. When young they can be grown as a container plant and eventually transplanted into the garden. As a garden plant, this cycad will usually hold two or three crowns of leaves, all in good condition.
Growing rate: It is a fast-growing plant, it will reach coning size in 8 - 10 years. Needs a large garden due to its size.
Soils: It prefer well drained, gritty soil with plenty of water, especially in dry weather.
Transplanting: This species transplants easily as a mature plant, although it is recommended to remove all of the leaves before doing so. This makes for easier handling and the plant will recover sooner due to less moisture loss.
Waterings: In cultivation prefers moist soil with good drainage for optimal growth. But it is eventually drought resistant. Irrigation systems can be detrimental to cycads, damaging the leaves and stems from the pressure of the water as well as over-watering.
Fertilization: Naturally undemanding for nutrients, it responds very well to regular applications of fertilizer. Growth can be greatly improved through the application of fertilizers. Most growers find that a fertilizer having an even NPK (Nitrogen, Phosphorus, Potassium) balance, and supplemental trace elements, provides a good start for cycads.
Exposure: It thrives and grows best in full sun or partial shade.
Wind tolerance: It prefers a sheltered position providing protection from the prevailing winds.
Hardiness: Frost sensitive (USDA zones 10-12). Encephalartos hildebrandtii is well represented in botanical gardens and private collections worldwide where the most tropical cycads can be grown. Even though this cycad grows at or near sea level, and almost on the equator, it exhibits an unusual amount of cold tolerance by surviving in temperate areas as well. In the warmer portions of southern California it grows with apparent ease, only suffering defoliation or leaf burn during extreme winters.
Traditional uses: The stem, like that of various South African species, yields Kaffir Bread. The farinaceous seeds serve as food in time of famine. The stems have reportedly been used for food in Zanzibar, although it is more likely the seeds that are used, as is the case in northern Kenya (the central pith of the stem and the endosperm from the seeds is used to prepare a starchy form of bread). Use of seeds as famine food in northern Kenya has in the past been shown to lead to a high incidence of liver cancer in the Boni people.
Propagation: It may be propagated by seeds. They are among the easiest plants to germinate, but appears to need shade for successful germination.