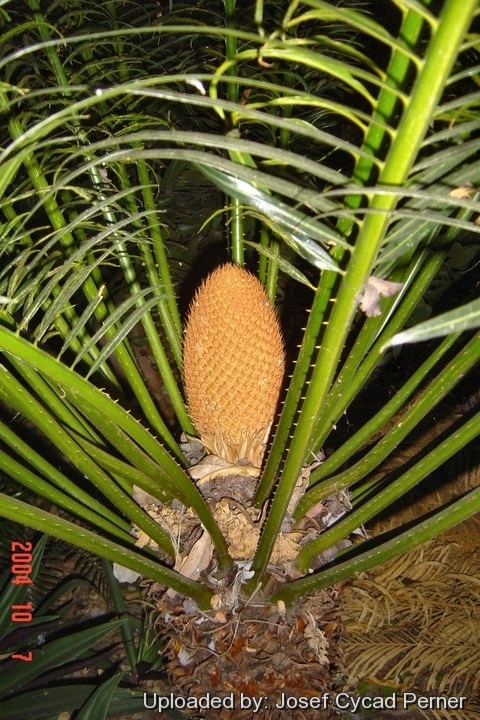 Origin and Habitat: Cycas rumphii is a native species of Indonesia (centred on the Moluccan island group, Maluku, or the Spice Islands) and in S. Borneo, northeastern Java, Maluku Papua, and Sulawesi. It also extends a short way along the north coast of Papua New Guinea (Papua New Guinea, main island group). The species is locally abundant. This species is relatively common in cultivation in Fiji and, to a lesser extent, Vanuatu. In both cases, female plants only are known, all of which have been vegetatively propagated from stem offsets.
Altitude range: It has been recorded from 10 to 600 metres above sea level.
Habitat and Ecology: This species inhabits near shorelines in closed woodlands or rainforest. Often on stabilized dunes composed of coral sands and coral limestone. Cycas rumphii along with Cycas circinalis and Cycas thouarsii appear to be dispersed by flotation in seawater. The seeds of these three species float when viable, apparently because of a layer of spongy tissue inside the sarcotesta. Viable seeds of the other species sink. Seeds of C. circinalis, C. rumphii and C. thouarsii are also larger than those of other cycas species and, unlike some other species of cycas, are generally not brightly coloured. The strong odour reported from both the male and female cones in the C. rumphii group has been regarded as both an insect attractant and deterrent. The threats to this species are unknown although there has been loss of habitat across its range.

Description: Cycas rumphii resembles a small palm tree, with a cylindrical, woody trunk 5-10 m in height. The plants are dioecious, that is to say that male plants produce pollen by leaf homologues called microsporophylls that are arranged in a long fusiform cone, thick and yellow to pale brown, arising annually, and female plants produce ovules in a row of leaf homologues known as megasporophylls. Fertilized ovules produce flatten-ovoid seeds that are red or orange at maturity, 3-4.5 cm in diameter with a spongy endocarp present, but only one sex is to be found on any one plant so both male and female plants must be grown if seed is required. The bright green, glossy leaves (fronds) are about the same size as Cycas circinalis with 150-200 leaflets. New leaves are produced in a dense terminal whorl in periodic "flushes" called a "break".
Distinguishing features: Cycas rumphii distinguishes within the group of species with spongy encocarp by the broad, falcate, hard, glossy leaflets with relatively broad bases, the relatively long and usually wholly spinescent petiole, and the narrowly triangular megasporophyll lamina with a slender apical spine (10-23 mm long) and vestigial lateral spines.
Derivation of specific name: The epithet 'rumphii' honours the German-born Dutch naturalist Rumphius (Georg Eberhard Rumpf, 1628-1702).
Stem (trunk): Arborescent, to 3 (-10) metres in height, and 40 cm in diameter (11-20 cm diameter at narrowest point). The bark is grey and distinctively fissured into rectangular, or diamond-shaped, segments.
Leaves (fronds): Pinnate, palm-like, 1.5–2.5 m long, grouped at the top of the trunk, long, flat (not keeled) in section, made up of 50-150 pairs of narrow leaflets (opposing leaflets inserted at 180° on rachis). Leaflets are smooth, shiny green, highly glossy, with orange tomentum shedding as leaf expands, 25 cm long, 1.5 cm wide. Median leaflets simple, flat with midrib flat above, raised below, strongly discolorous, 220-320 mm long, 12-16 mm wide, decurrent for 5-8 mm, narrowed to 4.5-7 mm at base, 15-19 mm apart on rachis. Basal leaflets not gradually reducing to spines, 19 cm long. Petiole, glabrous, spiny, 35–60 cm long.
Cataphylls: The cataphylls (Modified leaf, much reduced and thickened, serving to protect the apical meristem in cycads produced in flushes preceding the emergence of cones or leaves.) are narrowly triangular, soft, pilose.
Male cone (or strobilus): Oblong-ellipsoidal, 30–60 cm long, yellow, orange or brown (pale) in colour and foetid in odour. Microsporophyll lamina firm, dorsiventrally thickened, apical spine rudimentary, sharply upturned, 2-5 mm long.
Megasporophylls (or carpophylls): Like other Cycas species, the female plants do not bear cones; instead they carry ovules and seeds on fleshy, brown and densely white-tomentose or yellow-tomentose megasporophylls that are leaf-like pinnate structures about 18-32 cm long, that bear about 6 lateral glabrous ovules on each side of the margins of the lamina with the micropyles of the ovules directed away from the axis of the sporophyll. Lamina lanceolate, 5-7.5 cm long, 2.5-3.5 cm wide, obscurely dentate, with 12 soft lateral spines 0-1 mm long, 0-2 mm wide, apical spine distinct from lateral spines, 1.5-2.5 cm long. Fertile area about 35 mm wide.
Seeds: Flattened-ovoid, about 45 mm long and 30 mm wide, sarcotesta ripening from green to an orange- or reddish-brown colour, not pruinose; fibrous layer absent; sclerotesta apically crested. Spongy endocarp present.
Taxonomic note: Cycas rumphii, separated by Miquel in 1839 from Cycas circinalis, is part of a widespread species complex, all of which have been treated as part of C. circinalis at some time or other. Much of the confusion associated with this species arises from the difficulty in recognizing Miquel's segregate species C. rumphii, and its full geographic extent. The typification and a greater understanding of C. rumphii as a distinct species has just recently been clarified (Lindstrom, 2002). Almost all plants in cultivation that have been known as C. circinalis in fact belong to the C. rumphii complex.

Subspecies, varieties, forms and cultivars of plants belonging to the Cycas rumphii complex

The C. rumphii complex comprises a number of related taxa which have sometimes been considered conspecific. Differences between these taxa lie mainly in the shape and indentation of the lamina of the megasporophylls. 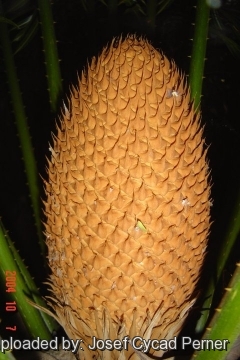 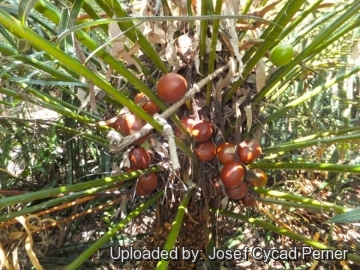 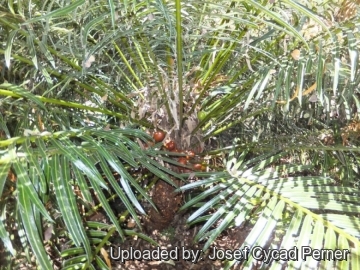 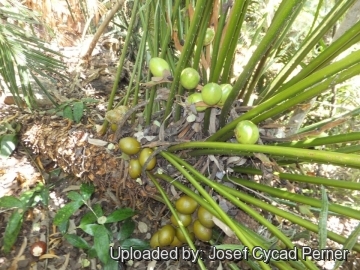 Cultivation and Propagation: Queen Sago is Cycas rumphii is suited to tropical regions which have a seasonally dry climate. It is easy to grow, tolerating dry periods. Queen Sago is often the focal point in a large yard.
Growth rate: Usually slow growing, however good conditions can speed it up considerably. Because of its growth habit, fertilize only when terminal bud begins to swell, indicating the start of the annual growth cycle.
Exposure: It prefers bright light exposure but colour bleaches when in full sun; best with some protection from afternoon heat.
Soil: Needs a well drained spot, with deep soil, but will still thrive in less than ideal conditions.
Maintenance: Minimal; removal of offsets if desired, removal of spent fronds.
Use: Landscape as cultivated perennial in warm, coastal areas; House-plant or interior-scape, as container plant in cool areas.
Food uses: C. rumphii is highly toxic, but despite this it is used as a food plant in times of famine by many conununities, from Papua New Guinea to Mji and Guam. Boiled or roasted seeds are eaten, youngest leaves are also eaten as vegetable. Fresh seeds are said to be toxic, poisonous. The trunk of the cycad contains a starchy pith from which sago can be prepared by drying, grinding and washing. In Papua New Guinea the Nekgini people take the seeds of the C. rumphii (also known as Palm food or Pattor) and remove their shells, pounding the seeds until flattened. Dry them in the sun, then soak in water for a few weeks. Package the seeds in leaves and boil them until they go hard. Mash the seeds with coconut or Canarium vitiense and put the mixture in a bamboo holder and cook. However, consumption of the flour may result in a neurological disorder because of the neurotoxins content.
Traditional medicine: A paste of Cycas seeds and coconut oil used for the treatment of skin complaints, wounds, ulcers, sores and boils; a poultice of the seeds and bark used to cure sores, skin complaints and stomachache. Leaves kept near the bed of the patient.) The pollen is strongly narcotic.
Propagation: The trees in their native lands are are planted as isolated individuals, by transplanting young shoots. The young plant grows very slowly, and therefore needs regular attention so that it is not overgrown by weeds. As an ornamental it is also raised by seed. As a slow growing plant, the seed can take from 6–18 months to germinate. After fertile seeds are collected, they usually need several months of storage before the inner embryo is ready to germinate. Therefore, it is best to clean the seeds of external fruit and set them aside before attempting to propagate the seeds.