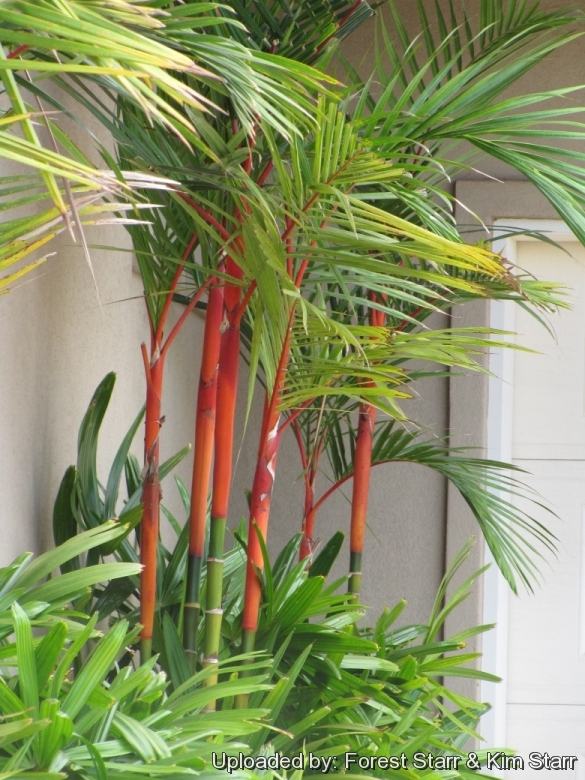 Origin and Habitat: South-east Asia (Peninsular Malaysia, peninsula Thailand, Indonesia, Borneo, Brunei, New Guinea and the island of Sumatra), Australia (Indian Ocean offshore islands, Christmas Island Group ) but has been introduced to other tropical areas of the world where it is cultivated as an ornamental palm.
Habitat: It is found in lowland coastal peat swamps, in wet woods by tidal rivers, in riverbanks and or in lowland rainforests up to 125 (500?) m elevation. Peat swamps are forests that have a layer of peat formation that can range from 0,5-1,5 m in depth. This species grows in forest adjacent to seasonally waterlogged habitats and does not tolerate long-term inundation.

Description: Cyrtostachys renda is a small to medium sized clumping palm to 9 m of height (occasionally up to 20 m) in its native range, often only to 3-5 m elsewhere, It is a spectacular plant, with vivid red crownshaft, and petioles, making it instantly recognizable from other palms. It is a suckering palm and makes a elegant colourful erect clump. It is undoubtedly one of the most beautiful palm in the world.
Stems: Clustered from the base, slender, erect, prominently ringed, spineless, brightened by vivid scarlet leaves sheaths. The stem usually is less than 10 m tall and 4-10(-15) cm in diameter.
Leaves: Pinnate (Feather-shaped) stiffly erect, broad and arched, up to 1,5 m long,
Leaflets 50-80 narrow; slender and 50-60 cm long with strong midrib and veins, rich green, glaucous beneath. regularly arranged and spreading in the some plane, young leaves often reddish. Petiole, very short, 18 cm long; bright scarlet. Leafbases, which form crownshaft, are about 60 cm long and scarlet-tinged.
Inflorescences/Flowers: This is a monoecious palm producing small panicles below the crown of leaves , the flowers come in groups of three, one female flanked by two males.
Fruit: Ellipsoid to ovoid about 8-10 x 4-6 mm, with a narrowed top, black with a scarlet base when mature.
Seed: Ovoid to round, 7-9 mm long. 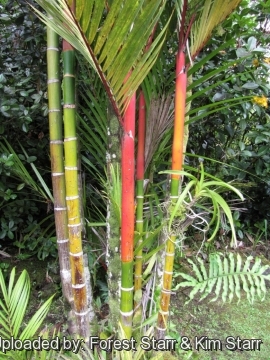 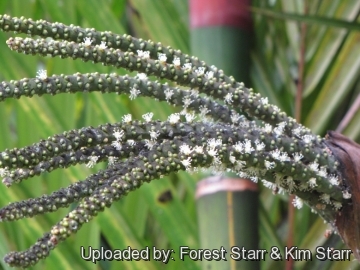 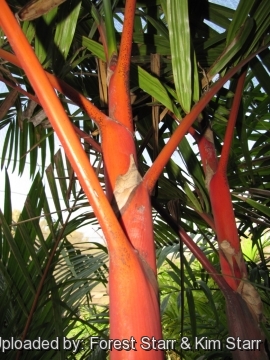 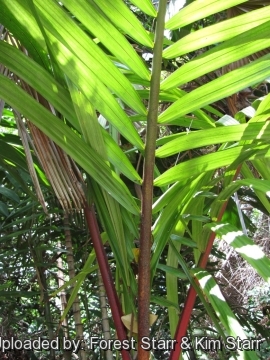 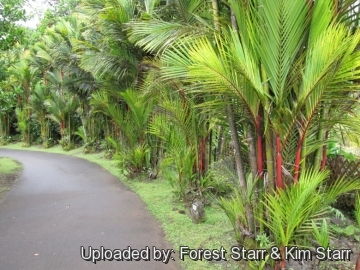 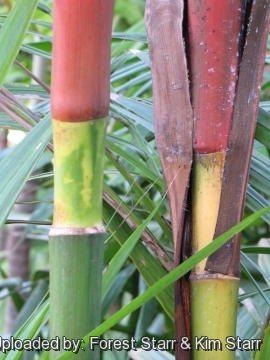 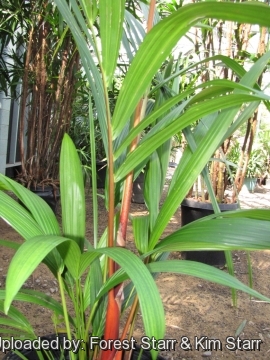 Cultivation and Propagation: This beautiful palm is often grown in tropical regions for its pretty red colour, but unfortunately it is virtually ungrowable outside the tropics. It is a relatively tricky, slow-growing plant that needs high humidity, well-drained soil, and is not tolerant of drought or wind. It's definitely worth an effort to grow this beauty! It lives also well under home conditions.
Soil requirements: It prefers rich, moist, loamy, slightly acidic, soils except those that are constantly soggy.
Watering: It prefers moist soils (not saturated) and require plenty of water at all times. As they naturally grow in swamps, they are highly tolerant of flooding, but don't let sit in standing water for prolonged periods.
Light: It adapts well to full sun or part shade. If home-grown, this palm will require a good overhead light and some sun as with most tropical palms.
Fertilization: Need a perfect fertilizer diet including all micro nutrients and trace elements. Micronutrient deficiencies are occasional problems. Micronutrient deficiencies only show up on soil with a high pH.
Aerosol salt tolerance: It is moderately salt tolerant, but does a lot better inland then it does on the coast.
Hardiness: This palm is extremely cold sensitive and need constant warmth. Any temperature drop below about 15° C is usually fatal. Ideal year-round temperatures range from 24° to 30° C. (USDA Zones 12).
Wind hardiness: It cannot tolerate sweltering heat and windy conditions.
Maintenance: Prune diseased, damaged or drying fronds, but do not prune if the frond still has some green colour. Palms recycle nutrients from dead or dying fronds and use them for healthier fronds. Palms only have a set number of new leaves that can sprout and grow per year and removing fronds will not increase that number. If you cut off more than what will grow annually, you could be left with a pretty bare and bald Palm.
Use: It is grown as an ornamental plant in gardens. For its dense and clustering growth habit, primarily is used as a shrub, hedge or screen in subtropical or tropical landscapes. It also can be used as a specimen palm to show of its red canes, especially if older leaves are pruned. It also makes a great potted specimen for a patio or inside.
Food Uses: Local communities in Sumatra eat the growing tip of the stem (palm heart).
Disease & Pests: This palm is resistant to major pests and diseases, but may require protection against scale insects, cold weather and spider mites.
Propagation: Fresh seeds are very slow to germinate, from a minimum of 2-3 months to 1 year and the seedlings are attractive. If not properly treated, the seed does not have long shelf life. It produces offsets, and these can be cut off, when mature enough, as a propagation method. For propagation select sturdy, shapely, healthy plant free from insect and disease damage. New leaf growth is desirable.