Origin and Habitat: Republic of South Africa. Eriospermum paradoxum is distributed widely in the Cape Province, from the Richtersveld in the north-west to near Grahamstown in the south-east. (Eastern Cape, Northern Cape, Western Cape)
Habitat and ecology: This species grows on red sandy flats amongst Fynbos vegetation or on clayey soils in semi-arid Renosterveld and Succulent Karoo, winter rainfall regions (flowering in autumn).

Description: Eriospermum paradoxum is an interesting species with a single leaf that is deeply divided into numerous fuzzy segments and gives the appearance of a small Christmas tree. The leaf, up to 100 mm in length, appears in winter. During autumn an erect raceme of white and green fragrant flowers is produced. The flowers, forming a tight cluster, are comparatively large and have a strong, sweet, scent. In spring the leaf dies off, leaving the tuber to rest underground for the next season.
Tuber: Oblong, irregular in shape, potato-like, to 5 x 2.5 cm, with a brown or greyish-brown skin. Interior parts of the tuber pink to maroon-red. Old leaf sheaths greyish-brown, membranous. At some localities the bulbs can grow to a considerable size.
Leaf: Solitary, hysteranthous (produced after the flowers). Contemporary leaf sheath exserted up to 30 mm, 3 mm diameter, white and glabrous at ground level becoming reddish and covered with short curly hairs above; lamina erect, cordate-ovate, to 7 cm long and 6 cm wide, shortly petioled, coriaceous, adaxial surface hairy, with a central-stemmed much-branched tree-like branched process (appendage) 7.5-11 cm long and 3 cm wide, green, issuing from its red base, bearing numerous compound, or simple linear pinnæ (leaflets) that are erect or patent (standing at 90 degrees) to the axis, almost dichotomously branched, thick and fleshy. Hairs white and soft.
Inflorescence: Peduncle short, hairy, with bracteal leaves. Raceme, sparse to dense, conical, 6–7-flowered to 9 cm long and 3.5 cm in diameter. Pedicels very short (to 6 mm). Bracts minute, ovate. The inflorecence develops in the summer or in the autumn after the green, assimilating leaf has withered.
Flowers: Spreading, to 1.7 cm across. Perianth 8 mm long. Perianth segments (tepals) white keeled with green, outer segments lorate (tongue shaped), 12 x 2 mm, inner segments linear-spatulate, to 10 x 2.5 mm. Stamens about half as long as the perianth; filaments linear-compressed and larger at base tapering to the anther, white 9 x 1 mm. Ovary globose, 2 mm in diameter. Style to 6 mm, white.
Note: E. paradoxum appears not to have close affinities with any other species. Salisbury (1866) placed it into a monotypic genus Thaumaza. Not only is it the only species in subgenus Ligulatum to have enations (scaly leaflike structures) but the enations have a different structure from those in subgenus Eriospermum. In this case the enation arises as a single structure, and then branches freely forming a feathery head, which varies considerably in shape from almost round to long and cylindrical. The compact inflorescence of comparatively large, white flowers is so distinctive that E. paradoxum cannot be confused with any other species of Eriospermum. 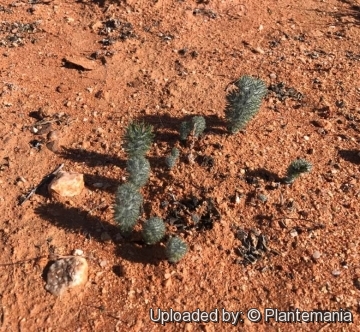 - In habitat, South Africa. Photo by: © Plantemania
Send a photo of this plant.

Cultivation and Propagation: Eriospermum paradoxum is a particular favourite of caudiciform and succulent plant enthusiasts. The plants are winter growing with a freely rooting potato-like tuber. Cultivation of the plants is relatively easy similar than winter-growing succulents, as othonna, tylecodon, conophytum, but it is not the easiest of all caudiciform. It is particularly prone to rot if left cold and damp while dormant.
Growth rate: It is a slow growing species and tubers take many years to enlarge.
Caudex exposure: Often in cultivation the remarkable tuber (caudex) is partially raised above the soil line so that this can be seen and more readily appreciated.. For best results the tuber must be exposed only when the plants become mature enough, usually after several years of underground growth.
Soil and pots: The tuber should be planted about a cm or 2 below the surface of a well drained soil. It likes pots with generous drain holes, needs a very airy potting medium which mainly consists of non organic material such us clay, pumice, lava grit, and only a little peat or leaf-mould, seeing that the main trunk is planted with the majority of the roots below the caudex line. It's rare that it will use the upper third of its soil and often this area serves like a mulch or support for the stem.
Fertilization: Eriospermums seem to have modest needs for mineral nutrients; a few doses of balanced, water-soluble fertilizer at half-stength over the course growing season are sufficient.
Exposure: This plant has an excellent heat tolerance, and need full sun to light shade exposures, but can tolerate shade.
Watering: Water only very occasionally during the summer months and in winter only when the soil is dry.
Hardiness: Tender. This plant can be difficult to get it to look its best without a good amount of heat and sun. Keep the plant cooler at in winter, but maintain the light as bright as you can so that any growth which it may produce at this time will not be etiolated. It can be grown outdoors in the summer months to benefit from direct exposure to light, and especially exposure to high summer temperatures. Protection in a warm greenhouse, or even a garage for a month or two in the middle of the winter will greatly increase the survival rate.
Rot: Rot it is only a minor problem if the plants are watered and “aired” correctly. If they are not, fungicides won't help all that much. It is very unlikely to lose this plant from root rot from excessive water.
Maintenance: Re-pot every two years and trim off the dead 'arms'.
Propagation: Propagation is by seed or by dividing the tuber.